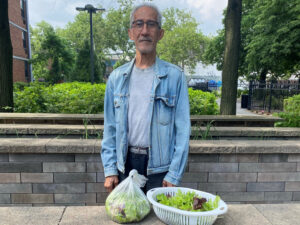 RiseBoro, an L+M 2022 grantee, has served New Yorkers for over 45 years, including some of our senior residents at Saratoga Village Houses in Brooklyn.

Since 2017, Saratoga Seniors have participated in Saratoga Grows, Saratoga Cooks, RiseBoro’s program that focuses on the food life cycle from seed to spoon, including plant cultivation workshops and nutrition and health education. The program was developed in partnership with the property’s senior center.

The farming portion of the program was held on-site and utilized the raised plant beds and greenhouse at Saratoga Houses. Seniors sowed seeds, tended to crops, helped harvest produce, and shared their spoils with their neighbors and the center’s cafeteria. In 2022, the program expanded to add a cooking component where seniors participated in cooking demonstrations that highlighted new recipes and incorporated the freshly grown produce into healthy homecooked meals.

Riseboro’s Saratoga Grows; Saratoga Cooks program has been a great way for senior residents to engage with their neighbors while building a vibrant food system to support themselves and others.